Peter Schiff talks to the Health Ranger about rising risks to the U.S. economy, collapsing dollar 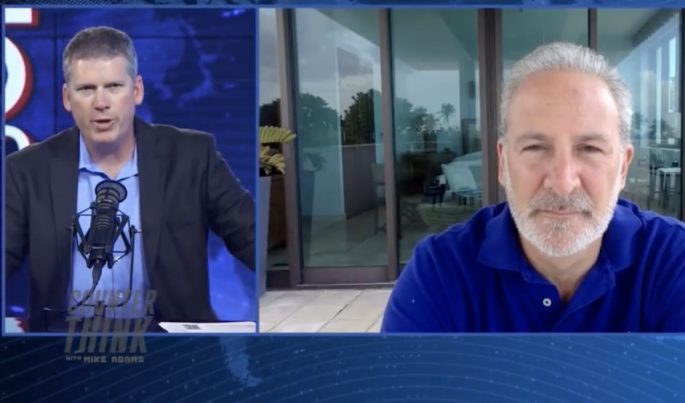 In a recent episode of “Counterthink” with Mike Adams, the Health Ranger, financial guru and economic expert Peter Schiff gave an insightful analysis of what’s currently happening in the stock market, where the dollar is headed, and what’s in store for American investors in the months ahead.

Schiff, the founder of SchiffGold.com, observed that the Wall Street was currently in bear country, a downturn that began without much fanfare in February and which continues to plague markets today.

“I do believe that in February we began a long-overdue bear market,” Schiff said. “Technically, we haven’t gone down 20 percent so Wall Street still calls it a correction.”

In recent days “we’ve had a bit of a rally, which to me looks like the correction in the bear market. The only thing that would stop the bear market from actually…materializing would be a change of policy by the Fed, which I wouldn’t rule out because I do expect the Fed to change policy.”

He said he believes the Federal Reserve will start reversing its rate hikes and eventually take the borrowing rate back to zero, while launching another round of QE — quantitative easing, an expansionary monetary policy in which the central bank purchases predetermined amounts of government bonds or other financial assets in a bid to increase capital liquidity and spur the economy.

Mainstream economists have claimed that the QE policy has led to the historic growth of the U.S. stock market and others around the world, but others say markets have been artificially inflated by the policy.

Schiff said if the Fed returns to QE, “we may never have a bear market,” but he’s not certain when the Federal Reserve chairwoman Jerome Powell, appointed in February by President Donald J. Trump, will reintroduce it.

He also noted that the economy under Trump “is really no better” than it was under President Obama’s eight-year tenure and that while it may seem “suspicious” that rates have begun to climb under Trump, he argues the Fed really had little choice.

“The Fed was backed into a corner where it had waited so long it kind of had to raise rates. Otherwise, the markets would have been onto the problem,” Schiff said, adding further that “we’re already seeing” the negative effects of rate increases.

“We’re running $100 billion-a-month budget deficits now” — which equates to $1.2 trillion a year if they remain on the same trajectory — “and that’s without the economy in recession,” the financial expert noted.

Add a recession to that mix — which is possible, he says — “and the deficits will be much higher.”

Adams asked when the national debt would become a real problem — if it hasn’t already — now that it’s sitting in excess of $21 trillion. (Related: MUST-HAVE items to use for trade during an economic collapse.)

“Well, I think it does matter, the question is, when does it matter enough to cause a crisis?” Schiff said.

He added that “government is much more expensive now” under Trump than Obama because of historic tax cuts coupled with dramatic spending increases in social welfare programs and the military.

“That’s why the dollar fell in January by the most it’s fallen in 30 years,” said Schiff. And “the dollar has not recovered any of those losses. It’s kind of just been going sideways. I think it’s ready for another big leg down, and that’s why you’re seeing oil prices rising to multi-year highs…you’re getting big moves up in silver, gold’s close to breaking out…and bond yields are rising.”

All of which is “indicative of a problem that is about to explode into a crisis.”

Americans who are 100 percent invested in the U.S. stock market are most at risk, Schiff added.

See more news and information about an economic collapse at DebtCollapse.news.

J.D. Heyes is editor of The National Sentinel and a senior writer for Natural News and News Target.