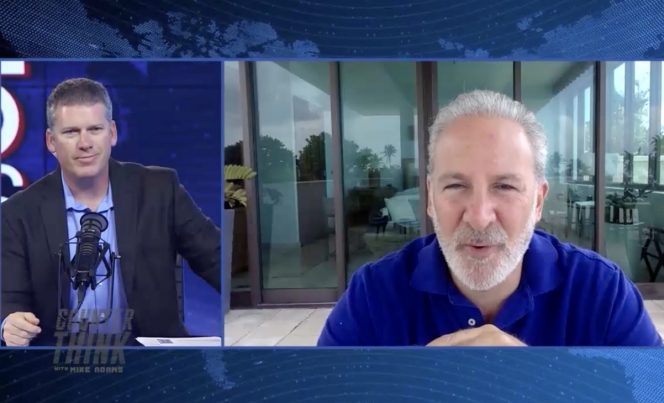 Mike Adams, the Health Ranger, launched his new “Counterthink” program on the Infowars network this week with an interview featuring financial expert Peter Schiff, who gave his  analysis of what’s currently happening in the stock market, where the dollar is headed, what’s in store for Bitcoin and what’s in store for American investors in the months ahead.

Schiff, founder of SchiffGold.com, said that currently, he believes Wall Street is experiencing a bit of a bear market he believes is liable to expand as the U.S. dollar — at its lowest in three decades — continues its slide, reflecting in higher oil, silver and gold prices.

Asked what he would tell someone who is just now waking up to the reality that much of what passes for conventional wisdom in the financial sector is based on faulty assumptions and fake news, Schiff said, “the good news is, they can still get out.”

“The markets are still close to their highs, and even though the dollar fell a lot in January, it fell from a very high level,” he said. “It’s still way over-valued. So you have time to get out of those assets, which would include stocks and bonds and get out of the dollar into a better portfolio of foreign stocks — not just indiscriminately but companies in the right countries with the right currencies and get some exposure to commodities, get some exposure to precious metals.”

Schiff — who predicted the Great Recession of 2007-2009 — added that the dollar will probably continue to fall, while commodities like gold and silver will continue to climb. In fact, he sees gold rising on “$100 days in a ‘Katie, bar the door’ situation.” (Related: Huckabee Sanders: ‘Laughable’ to hear Obama take credit for Trump’s economy (Video).)

In mentioning Chinese stock market scams, Adams mentioned that overseas investing is pretty scary for a lot of Americans, simply because they’re not as familiar with foreign markets. So he asked Schiff how they could feel more certain about trading on overseas markets.

He explained that he really wanted to avoid investing in the U.S. market because he wanted to avoid risks associated with a falling U.S. dollar. There are other systemic risks as well, including having all of their investment eggs in a single market.

The dollar, which has been the world’s reserve currency since shortly after World War II, carries no guarantees, Schiff explained. Like every other currency and like prior global reserve currencies such as the British Pound, the dollar, too, can bottom out under a perfect storm of economic calamities both at home and abroad.

That’s one reason why he is recommending gold — physical gold that is kept in locations other than the United States. It has always had value and in economic hard times, its value always rises. In fact, Schiff said he just bought gold stocks, which are now very inexpensive, for himself as recently as a week before his interview, because he sees their value only rising.

“If we just get a 10-20 percent move-up in gold from here, I think gold stocks could double, maybe more,” he said. “There’s so much pent-up leverage there because everybody thinks gold’s going to go down.”

Moving to cryptocurrency, Adams noted that many of the cryptocurrency ICOs were rife with fraud and drew a lot of people in who were expecting, unrealistically, huge returns on their investment, and very quickly.

Schiff said “those riches are generally reserved for the people who get in early and get out by the time everybody else hears the story.”

“The money has already been made in Bitcoin and other cryptocurrencies,” Schiff explained. “Now what the people who bought in early are trying to do is ring the cash register.”

J.D. Heyes is a senior writer for NaturalNews.com and NewsTarget.com, as well as editor of The National Sentinel.