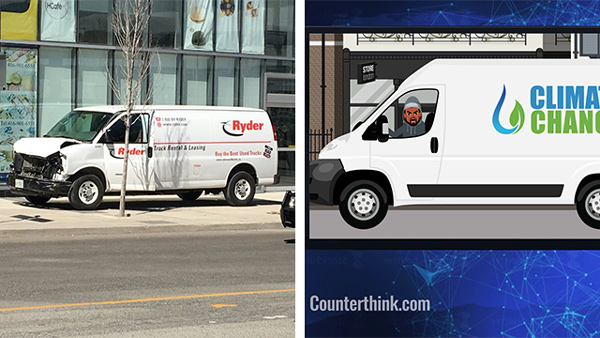 It’s very strange when these things happen. My prayers go out to those victims of today’s heinous terrorism attack in Toronto. Sadly, I literally saw this coming (but the left-wing media refuses to report on terrorism when carried out by certain “protected” people groups). This is all explained below…

When I saw the top picture on DrudgeReport.com today, a chill went down my spine. The image of the white van on the sidewalk, mowing down innocent pedestrians was the subject of an animation video I just completed after months of work.

As you see in the feature picture of this story you’re reading right now, the picture on the left is the real van on the sidewalk in Toronto, following the mass murder of innocent pedestrians. The cartoon image on the right is from my “CNN explains van terror attacks” satire video that I was about to release tomorrow, after months of animation, storyboarding and voiceover work with my team.

I’m releasing the full video, along with my explanation, below. The point of the video animation was to show how the left-wing media always refuses to report such attacks as “terrorism” if a Muslim, immigrant or refugee was driving the vehicle. But if a white person is involved in violence, then it’s immediately branded “terrorism” without any real investigation. That’s the point of the satire video. Watch it here, before it gets banned: